Intervening Parties in the Perinçek Case

On January 28, 2015, the lawsuit Doğu Perinçek v. Switzerland will begin retrial in the Grand Chamber, which acts in the capacity of court of appeals for the European Court of Human Rights.

It is now common knowledge that in 2005, Doğu Perinçek traveled to Switzerland, which has officially recognized the Armenian Genocide and passed a law criminalizing its denial, in order to issue declarations in Bern and Lausanne where he impugned the Armenian Genocide as a fabrication. In 2007, Perinçek was found guilty of deliberately violating national law and convicted by the court of Lausanne. Upon Perinçek’s appeal, the European Court of Human Rights ruled in his favor in 2008 and found that the court of Lausanne had violated the freedom of expression principle enshrined in the European Convention of Human Rights, article 10.

The Human Rights Association sent a letter to the Swiss Federal Office of Justice in 2014, demonstrating in detail how the denial of the Armenian Genocide incites hostility toward Armenians and imploring Switzerland to appeal the ECHR decision. Switzerland’s subsequent appeal and request for retrial were accepted in June 2014.

The first hearing of the said retrial will take place on January 28, 2015.

The Human Rights Association from Turkey joined The Center for Truth Justice Memory and the Toronto-based International Institute for Genocide & Human Rights Studies to appeal to the ECHR in July to present a Third Party Opinion File, i.e., to be accepted as intervening party. The ECHR approved this request by the three human rights organizations.

We have explained in this file that the denial of the Armenian Genocide provokes ethnic hatred in Turkey and encourages anti-Armenian elements. Neither the ECHR ruling and nor the file we have presented as third party concerns itself with the historical reality of the 1915-1917 massacres or their precise legal definition. The crux of the issue lies in the fact that Perinçek’s declarations are conducive to racism and discrimination. In this sense, the retrial in the Grand Chamber carries special significance as a precedent in addressing denial, minimization, and justification in a context outside of the Holocaust.

The ECHR decision had restricted denialism and discrimination to their effect on Swiss Armenians and disregarded Perinçek’s leadership of the Talat Pasha Committee, as well as the fact that his refutations of the genocide as an international lie have direct bearing on the Armenians of Turkey even if they were pronounced in Lausanne. We have therefore argued in our file that Perinçek’s declarations do not only concern the definition of events, but also commit the crime of discrimination; that the ruling must take into account Perinçek’s position as a prominent politician from Turkey, the head of the Labor Party, and the leader of the Talat Pasha Committee—as well as that Committee’s objectives and operations.

Yes, the act that was found criminal according to the Swiss law was committed on Swiss soil, but the Talat Pasha Committee and its leaders, including Perinçek, have been conducting operations in Turkey and targeting Turkish society. The recipient of their message—that those who listen to Armenians will be subject to intervention and retribution, even if they are at the other ends of the world—was Turkish society. The same Turkish society that is being targeted by this message has been fueled by hostility toward Armenians and other non-Muslim peoples for generations. Anti-Armenian sentiments and thoughts have been exacerbated throughout Republican history by the constant dogma, mass media dissemination and educational indoctrination of the notion that the eradication of the Ottoman Armenian population and civilization is a lie.

Denialism does not simply consist of declarations along the lines of “no genocide has taken place.” Denialism requires the justification of the irreversible and inexpiable eradication of a people: The notion that “it is Armenians who are responsible for the events,” namely that Armenians had deserved eradication, that they had “stabbed Turks in the back” and collaborated with the enemy, has always been and is still perpetually reiterated in classrooms, university conferences, TV series and programs, and books.

Hostility toward Armenians is not confined to mere words but also takes lives. In this context of discrimination and ethnic hatred, Armenians were attacked and Hrant Dink, the founder and director of Agos, was the victim of an assassination whose perpetrators have yet to be brought to justice.

Armenian private Sevag Şahin Balıkçı was shot dead in 2011 by another soldier in Batman, where he was on military duty, specifically on the day of April 24, the universal commemoration day marking the beginning of the Armenian Genocide. Court proceedings have met with significant public distrust, while the press has indicated that commanders pressured privates to testify that the incident was “an accident.” Furthermore, the “Hodjali Protests” of February 27, 2012, which took place in the central Taksim square and featured as a speaker the Minister of Internal Affairs, displayed banners proclaiming “You Are All Armenians, You Are All Bastards.” Within the span of two months from 2012 to 2013, the Samatya district of Istanbul, which is densely populated by Armenians, saw similar and successive attacks on elderly Armenian women—among them the murder victim Maritsa Küçük, whose bones were smashed and entire body relentlessly stabbed. And on February 23, 2014, banners saying “Long Live Ogün Samasts, Damned be Hrant Dinks” were displayed, unprohibited, in front of the newspaper Agos.

In sum, genocide denial is the chief, most fundamental basis for the state-sanctioned threat to existence under which Armenians continue to live in Turkey.

As two human rights associations that have witnessed first-hand and up close the provocation of ethnic hatred by anti-Armenian acts and declarations, we, the Human Rights Association and the Center for Truth Justice Memory, consider it our natural duty, as per our raison d’être and field of operation, to present our observations to the European Court of Human Rights in order to contribute to the making of a fair and just decision.

Finally, we insist yet again: Denial causes hatred and hatred kills. We defend the inalienability of the right to live in safety, unafraid of tomorrow, and hope that the European Court of Human Rights will, in the name of the universal law of human rights, obstruct discourses that incite acts in violation of this inalienable right. 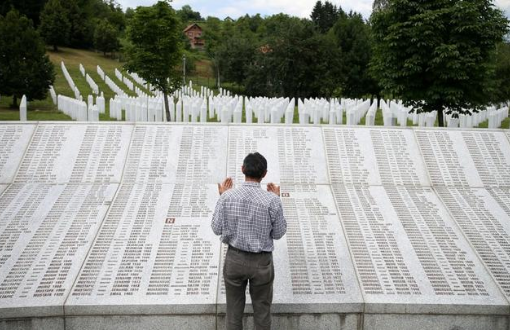 25 years after Srebrenica: Denial as the final stage of genocide