On 15-16 January 2015, the Truth, Justice and Memory Center organized a two-day closed workshop titled Hakikat ve Karşılaşmalar: Diyalog Mekânlarının Dinamiği // Truth Telling and Encounters: Dynamics in Sites of Dialogue with the participation of civilian society representatives from regional countries neighbouring Turkey. The workshop was organized within the scope of the Truth, Justice and Memory Center’s project titled “Tarihsel Diyalog ve Geçmişle Yüzleşme için Bölgesel Ağ // Regional Network for Historical Dialogue and Dealing with the Past – RNHDP”.

The primary objective of the project and the workshop, which was the first activity of the project, was to increase relationships of communication, awareness and collaboration between regional civilian society organizations active in the fields of historical dialogue, peace and reconciliation, and to form a network [matrix?]. Our work along this line has continued since 2012 within the framework of our partnership with the Human Rights Studies Institute of Columbia University. The first seeds of the idea for this project were sown during the two-day workshop meeting held on 24-26 October 2013, bringing together 14 NGO [CSO] representatives from Cyprus, Armenia, Lebanon, Croatia, Palestine, Israel and Turkey.

Within this framework, the Truth, Justice and Memory Center has continued the activities of the project “Regional Network for Historical Dialogue and Dealing with the Past” since August 2014 with the support of the Open Society Foundation and Robert Bosch Stiftung. This was the context within which the first event of the project, “Truth Telling and Encounters: Dynamics in Sites of Dialogue” was realized.

More detailed information on the project and the regional network it focuses on is available at our project web site.

The topic of the first session of the first day of the workshop was truth telling and truth formation. The first presentation of the session was given by Armine Sadikyan from the Armenia Office of the Helsinki Citizens’ Assembly. Sadikyan spoke about the campaign they carried out as the Helsinki Citizens’ Assembly for a draft law for the forcibly disappeared, so that the forcibly disappeared in Armenia are legally recognized and the State actuates the necessary procedures for the forcibly disappeared and their relatives. The second presentation was given by Lynn Maalouf from the Lebanese organization Act for the Disappeared. Maalouf spoke about the struggle put up by relatives of the disappeared along with civilian society after the civil war, and the place of the right to truth in this struggle. Throughout her presentation, Maalouf also pointed to the similiarities between Sadikyan’s account of Armenia and the Lebanon experience. The third presentation was given by Debby Farber from the Israeli organization Zochrot. Farber spoke about the experience of the non-official truth commission they realized in December 2014 about Nakba, which led to the foundation of Israel and the expulsion of Palestinians from their lands. Farber discussed the questions and difficulties raised both by the fact that the truth commission they organized had not been held at a period of transition and reconciliation, and by the fact that it was not official.

The topic of the second session of the first day of the workshop was the ways in which digital technologies are used in processes of historical dialogue and dealing with the past. Israeli human rights activist and co-founder of Zochrot, Eitan Bronstein spoke about how videos shot with mobile phones can serve in memorialization, presenting as example the videos he shot himself. Bronstein emphasized how mobile phones were very practical tools for memorialization work, both because video production with mobile phones is practical and cheap, and because the person speaking feels comfortable when being recorded by this tool. Bronstein showed videos in which he researched Palestinian memory in Israel. After Bronstein, Daphne Lappa from the Association for Historical Dialogue and Research organization in Cyprus, spoke about the internet project they had formed to recount the 20th century history of Nicosia in a multicultural and multiperspective manner. Lappa underlined the importance in forming different historical narratives of poly-narratives and interactive methods presented by the internet as opposed to dominant, nationalist and faux-heroic narratives. The first day was completed with a final session for the discussion of all the presentations moderated by Rana Zincir Celal from Columbia Global Centers.

The theme of the workshop’s second day was, in the broadest sense, ‘Encounters’. In the first session, Sona Dilanyan from the Imagine network formed by activists from Armenia, Georgia and Azerbaijan spoke about the dialogue meetings held between Armenia, Georgia and Azerbaijan and the points where they faced deadlock. Dilanyan mentioned the importance of voicing differences in a manner that does not fuel conflict rather than developing dialogue via the similarities of the sides. Edgar Khachatryan from the Peace Dialogue organization in Armenia then made a presentation on the “Let’s See… Let’s Choose… Let’s Change…” project. The project, which focuses on young people affected by the clashes in Nagorno Karabakh, uses methods such as the theatre of the oppressed and critical media analysis to equip young people against dominant and faux-heroic media language and official historical narratives.

Mete Hatay, from PRIO in Cyprus, and Rebecca Bryant from LSE discussed the dialogue meetings that have taken place in Cyprus over the past thirty years, and how effective or not these meetings have been. At the end of the presentation, in the framework of civilian society projects, examples of local reconciliation, which they coined ‘vernacular reconciliation’, and which develop spontaneously, are held in fields such as architectural and food culture, and at times also sought commercial benefit were discussed. The speakers emphasized that concentrating on such examples that develop in different locations can produce new knowledge and strategies.

Day 2 | Panel 4:  “Where Do we Go From Here? Future of the Network”, moderated by Meltem Aslan (Hafıza Merkezi, Turkey) and Prof. Elazar Barkan (Columbia University, USA).

At the end of the second day, the workshop was assessed and its future was discussed. A 6-person “steering committee” of Rebecca Bryant, Armine Sadikyan, Edgar Khachatryan, Lynn Maalouf , Sergey Rumyantsev and Enis Köstepen was formed for the activities of the coming period. 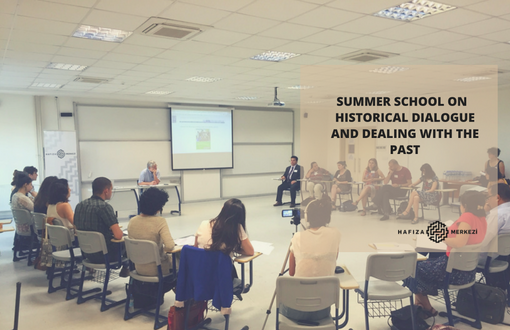