Hafıza Merkezi joined an online discussion on Documenting the Disappeared from 27 November to 8 December 2017. The discussion was part of a series of community discussions carried out by HURIDOCS (The Human Rights Information and Documentation Systems) around different thematic issues. Along with Act for the Disappeared from Lebanon, we partnered with HURIDOCS to co-host the latest discussion on the documentation of enforced disappearances. Along with Justine Di Mayo (Act for the Disappeared, Lebanon) and Özlem Kaya (Hafiza Merkezi, Turkey), discussants of the discussion included Tamar Hayrikyan (Técnicas Rudas and Centro Diocesano de Derechos Humanos Fray Juan de Larios, Mexico), Celina Flores (Memoria Abierta, Argentina) and Jorge Ruiz Reyes (Universidad Iberoamericana Mexico city, México).

During the two weeks program, participants have shared their questions and answers online on related discussion points. The result has been a space of dialogue and source of information  on the experiences, considerations, resources and case studies of people and organisations working on different aspects of working on documentation of enforced disappearances. Besides Q&A sessions, 4 webinars – a concept used as a shorthand for web based seminars – were held as part of the program. In one of the webinars, Özlem Kaya made a presentation describing Hafıza Merkezi’s methodology on data collection, documentation and verification in relation to cases of enforced disappearances. Online discussions were held under four goals for documenting disappearances.

Below, you’ll find the summary of the discussion prepared by Kristin Antin of the HURIDOCS.

Click here for the HURIDOCS community discussion page on Documenting the Disappeared.

Goal 1: To stop and prevent disappearance (in conflict settings)

In working towards this goal, the information collected through documentation can be used to advocate and lobby to stop disappearances, request the government to carry out investigation on the fate of missing people, denounce at national or international level through media and advocacy campaigns, and report analysis of various aspects of the disappearance.

Below are a few examples of how documentation efforts have been used to stop and prevent disappearances:

On December 10th (World Human Rights Day) 2015, Hafiza Merkezi organised the poster campaign Where are they? on the streets of Istanbul to draw attention to the practice of enforced disappearance and to reiterate the demand for justice, in this case related to past crimes.

HRDAG, Data Cívica, and the Human Rights Program at Universidad Iberoamericana created a database of clandestine graves in Mexico, based on reports by the local and national press. They compared the records with official figures to give a more accurate estimation about the magnitude of the problem in the whole country. They used the data to create a statistical model that predicts other municipalities in Mexico with high probabilities of having clandestine graves. Their documentation work is aimed at putting pressure on the government to carry out investigations on clandestine graves and to create better public programs regarding missing persons in Mexico, such as exhumation programs.

Goal 2: To reveal the fate and whereabouts of the disappeared and retrieve their remains for their families The goal of revealing the fate and whereabouts of the disappeared can be supported by collecting information about the context of disappearances. Such as:

To support human identification it is important to document location of graves, develop a hypothesis on the identity of the missing that are buried in the graves, collecting ante and post mortem data or ante disappearance data.

“It is important to document clandestine graves findings with different sources of information. The media may observe findings that have not been observed by the official institutions and vice versa.” Jorge Ruiz, Universidad Iberoamericana Mexico city

“We use a database and mapping to archive the data and to link the different layers of information, in order to reconstruct the itinerary of the disappeared people.” Justine Di Mayo, Act for the Disappeared

When working towards this goal, the documentation will consist of gathering evidence to establish individual and state responsibility and support criminal prosecution, and to establish a comprehensive truth about what happened thus contributing to institutional procedures to ensure disappearances do not reoccur.

Documenting the life of the disappeared person contributes to recognising and restoring the dignity of victims. To guarantee non recurrence, the information can be used to develop awareness-raising tools such as archives, museums and commemorations. There are many considerations to take into account throughout the process of documenting disappearances. The following points were highlighted in this discussion: 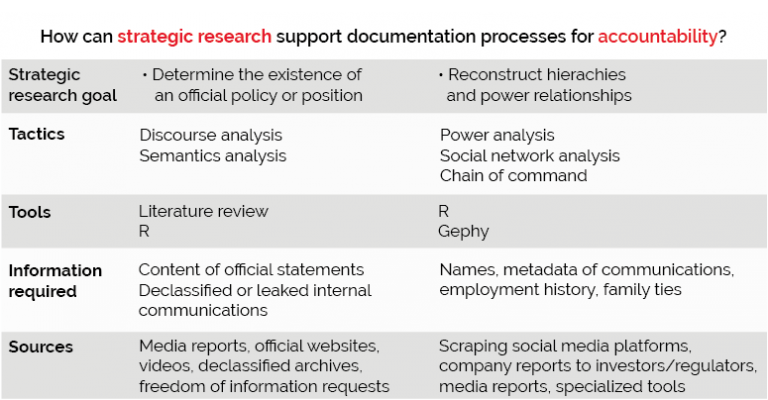 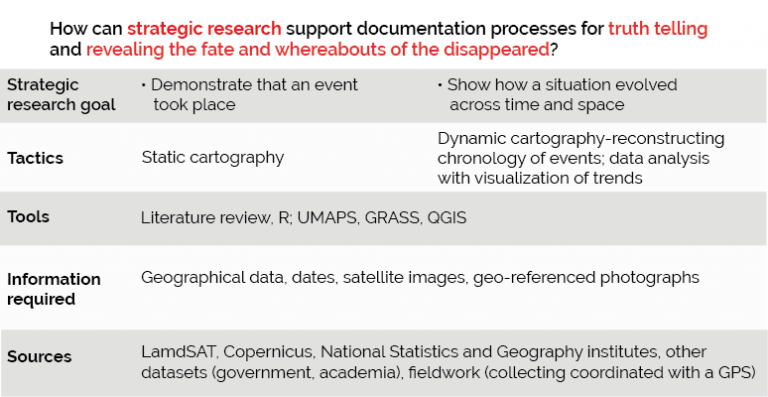 Recordings of our four webinars are embedded below. Thanks to our intern, Indira Cornelio, each video has Spanish subtitles available.

Documenting the Disappeared: Goals and methodologies

Tamar of Técnicas Rudas and Centro Diocesano de Derechos Humanos Fray Juán de Larios (Mexico) presents frameworks for applying strategic research and context analysis to the work of documenting disappearances, and examples of what these frameworks look like in practice.

Jorge Ruiz Reyes of the Universidad Iberoamericana (Mexico) will talk about the statistical models, methodologies, and platforms that they have used in their work documenting disappearances.

The significance of remembrance in transitional justice

Özgür Sevgi Göral In the past, discussions on ‘transitional justice’ in Turkey mostly revolved around the Kurdish issue that has …read more > 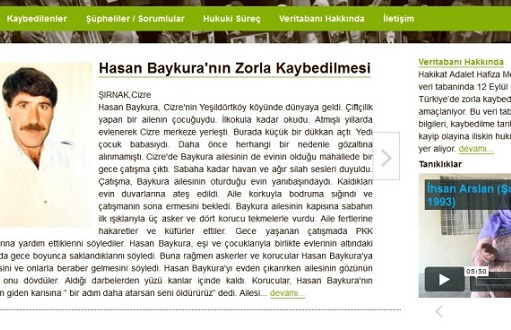 Database on Enforced Disappearances is Open!