Şiyar Kaymaz and other intervening parties to to the Lice Case are on their way to the first trial of the case to be held in the absence of Tahir Elçi.

Soon it will be two years since Tahir Elçi left his dying body at the foot of the Four Pillared Minaret where he was present to protect a precarious peace, and to say “stop” to the warring parties.

He was a father who did not want his children to grow up with war, and so questioned the ‘90s which had stolen our childhood. I first met Tahir abi[1] during the court proceedings of the Lice Case[2]. As victims of the military operations that killed 15 civilians, we started closely monitoring the case with the aim of coming to terms with the dirty war and exposing the hidden secrets behind organizations like Gladio[3] and JİTEM – Gendarmerie Intelligence and Anti-Terror Unit. Tahir abi was a big supporter of our civic initiative Lice is Seeking Justice Platform, which we set up to monitor particularly the Lice Case.

While we as victims were worried that the case would be left unattended as the court relocated hearings to İzmir[4], we were also comforted by the knowledge that Tahir abi would attend every single hearing no matter what. During the trial, a time came when he, with his silver-tongued legal language, persuaded the panel of judges to bring a defendant to the court. Yet in another time, he requested the judge to recuse from the case due to his unlawful attitude.  When we told him that in protest of fair trial violations we were considering to no more attend the court hearings, it was again him who convinced us to attend, no matter what.

Lice Case had special significance for Tahir abi. Having spent years to expose JITEM and its military cadres, this time he was working to reveal the suspects of an assassination to a military person, Brigadier General Bahtiyar Aydın. He placed special importance to this particular aspect of the case and took great care to attend every single hearing. Especially with the seemingly new positive trajectory of the peace process, he never stopped arguing for the crucial place of such court cases in the process. Tahir abi believed that along with the process of resolution, such court cases would play a significant role in establishing peace. He believed in the resolution process. Sometimes when I questioned him and spelled out my doubts concerning peace, he would say “No, Şiyar; this is calling for the bad, think more thoroughly and positively”.

The general atmosphere, however, made positive thinking very difficult.

Amidst the initial intemperance concerning the peace process when tables were being toppled, Tahir abi was the only person resisting the closing of the doors to peace. When the peace process seemed to be ending, each of the high level military personnel then being tried in courts started receiving raises, one by one being promoted to positions in the region. Tahir abi, hoping to end the chaos that started following June 7, 2015 general elections, and trying to make sure that war no longer reigned in the region and that his and our children would live in an atmosphere of peace, still aimed to keep the door to peace open. Just like he did in cases of past atrocities.

For us, Tahir abi was a dove. The following is, perhaps, the extent to which a dove can make itself felt:

In Lice Case, he wanted very much to have the defendants face court. Following his assassination on November 28th, 2015, our first time in court was on December 24, 2015. In the hearing right before this one, finding out that his demand was not met, Tahir abi addressed the panel of judges and said to the presiding judge, “we do not like you and we ask you to withdraw from the proceedings”. That judge was not present in the hearing following his death. During that hearing, the courtroom was jam-packed with all the victims carrying photos of Tahir Elçi. His photo was placed on the seat where he normally sat, and the statement he made in that former hearing was re-read by the lawyers of the victims. Later the court board gave a brief recess to assess the request to bring the defendant before court. Just as the judges returned to announce their judgment, a dove entered the court room through one of the open windows. Amazed at the sight, the victims almost believed that it was Tahir Elçi coming to listen to the decision. While the panel of judges announced their decision to indeed bring the defendant before court, the dove tweeted. Then, flapping its wings, it flew out the window. Everyone thought that the tweets, surely, must have signified the approval of he who never missed a hearing, that of Tahir Elçi.

The victims and relatives of cases of past atrocities loved and respected Tahir Elçi. With his assassination, and, in his absence, these trials have almost lost their substance; just as peace has lost its meaning after his death. We miss him. Just like we miss peace. 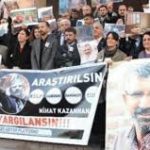 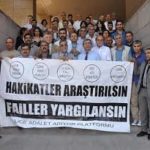 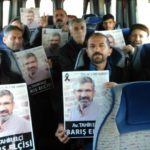 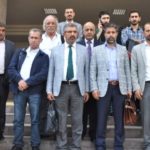 [1] A word of calling for men of older age to express respect and love.

[2] During a military operation held in the Lice county of Diyarbakır province on October 22 1993, 15 civilians, along with one soldier (Yüksel Bayar) and Gendarmerie Regional Commander Brigadier General Bahtiyar Aydın lost their lives.

[3] Operation Gladio is the codename for a clandestine North Atlantic Treaty Organisation (NATO) “stay-behind” operation in Italy during the Cold War. The counterpart of the Italian name Gladio corresponds to paramilitary/counter-guerrilla and Special Warfare Forces in Turkey. For more on the issue, see: https://hakikatadalethafiza.org/en/kaynak/unspoken-truth-enforced-disappearances/

[4] A city in western Turkey, 1,419 kms to Diyarbakir where the province of Lice is located and the crime took place.