Over the past year, various countries across the world witnessed new developments concerning enforced disappearance.

Enforced disappearance was used as a policy of intimidation and extermination in almost every part of the world. Contrary to popular belief, dictators were not the only practitioners of this policy. Even today some democratic governments continue to commit this crime. On the other hand, human rights advocates and the relatives of the victims continue to fight against this policy. Thanks to this fight, some states have been forced to take steps toward truth, justice, and reparations. Paul Seils, the Vice President of the International Center for Transitional Justice, describing enforced disappearance, said that “it is hard to imagine a more cowardly or terrifying abuse of state power than to subvert the most fundamental rights of an individual by disappearing them.”

Over the past year, various countries across the world witnessed the following developments concerning enforced disappearance:

The jurist Baltasar Garzon investigated the fate of approximately 114 thousand people who were disappeared during the civil war and under the fascist Franco regime. As a result of his investigation, he was accused of  “breaching his authority” and a case was started against him on 24 January. It is alleged that Garzon’s investigation violates the amnesty law established in 1977. International human rights organizations described Garzon’s trial as a scandal.

The trial of former dictator General Efraín Ríos Montt, who hid for years behind parliament’s shield of impunity, started in February. It is purported that Ríos Montt is responsible for the genocide of the Maya as well as for crimes against humanity, including the disappearance of thousands of people between March 1982 and August 1983. Between the military regime, which toppled the democratic government in 1954, and the rebels, 200 thousand people died in the civil war that raged 1960 -1996. In 2004, at the Inter-American Court of Human Rights, the Guatemalan government accepted that the military dictatorship had carried out genocide in the case of the Plan de Sánchez massacre in 1962, when 260 people were killed. In a country coping with this grave legacy, the trial of Ríos Montt is giving way to the hope that impunity will come to an end.

Former Argentinean dictator General Videla accepted for the first time that he was responsible for the disappearance and killing of thousands of people. In an interview shown on local television in April, it was revealed that he said “We can say that 7,000 or 8,000 people had to die in order for us to win the war against subversion.” Human rights organizations claim that between 1976 and 1983, approximately 30,000 people were disappeared. Videla, one of the people responsible for this policy, is currently serving a life sentence in a jail outside of the capital of Buenos Aires.

In Argentina, after the amnesty laws prohibiting the trials of the criminals were nullified in 2005, the criminal cases were reopened. According to official statements, 400 suspects were tried and 86 convicted in 2012. Argentina is shown as a successful example in terms of judging crimes committed in the past.

With the dissolution of parliament in May 2012, the work of parliament and civil society on the draft of a law to establish the Commission of Inquiry on the Disappearance of Persons were interrupted. In August, a new proposal was presented to the President that would unify two commissions. Rights organizations that have examined this proposal’s details found this proposal less developed than previous drafts. Discussions are expected to continue in 2013.

Conflicts that started in 1996 between Maoists and government forces continued until the signing of the Comprehensive Peace Agreement (CPA) in 2006, which recommended the establishment of a truth commission. After CPA, positive expectations for justice and reconciliation picked up speed in 2008 with the abolition of the monarchy. According to the UN Working Group on Enforced or Involuntary Disappearances (WGEID), between 2003 and 2004 Nepal became the country in which the highest number of enforced disappearances occurred.

In May, President Dilma Rousseff officially appointed a truth commission that will work for two years researching state-sanctioned human rights violations and will release a report with its findings. The commission’s primary goal is to assert “the right to access the truth and the facts about the past” as well as to promote “national reconciliation.” The commission is researching state crimes, including the enforced disappearances that occurred between the years of 1946 and 1988.  The general amnesty implemented in 1979 took those who committed crimes during the dictatorship’s rule under the protection of legal impunity. The commission has been criticized for remaining non-binding against those who enjoy impunity. What Brazil’s Truth Commission—established quite late in comparison to other countries in South America—is going to bring will be seen in time.

One of the victims of the CIA’s policy of extraordinary rendition, a citizen of Germany named Khalid El-Masri, opened a case at the European Court of Human Rights. The ECHR’s decision found that there had been a violation of his rights. In the decision, which was released on 13 December, it stated that Macedonia had violated several clauses of the European Convention on Human Rights, including the prevention of torture and inhumane treatment, the right to liberty and security, and the right to effective remedy before a court. Human rights institutions find this decision very important in terms of condemning the policy, used by the United States after September 11, of illegally transporting and detaining “terror” suspects in detention centers. 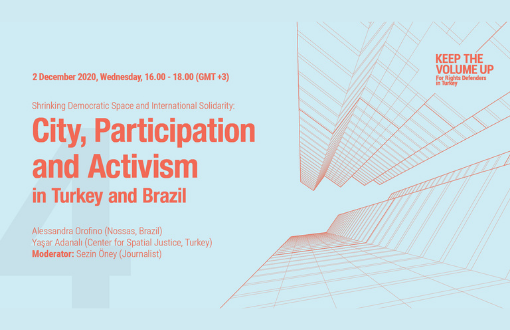